Some Metric Properties of Sets Related to Luroth Expansion

For any real number

and [x] denotes the greatest integer not exceeding x. We define the integer sequence

, this map can generate a series expansion of x, i.e.,

are positive integer for any

the digits of the Luroth expansion of x, and write the above representation as

for simplicity. Such a series expansion was first studied by Luroth[1] in 1883.

Luroth series expansion plays an important role in the representation theory of real numbers and dynamical systems. It is well-known that every irrational number has a unique infinite expansion and each rational number has either a finite or a periodic expansion (see Galambos[2]). For dynamical properties, the transformation T is invariant and ergodic with respect to Lebesgue measure[3-5]. In other direction, Fan et al [6] obtained the Hausdorff dimension of sets of real numbers with prescribed digit frequencies in Luroth expansion. Barreira and Iommi[7] considered the Hausdorff dimension of a class of sets defined in terms of the frequencies of digits in Luroth expansion. For more details, we can refer the reader to Refs. [8-10].

, containing at least two points, is a scrambled set for f if every pair

of distinct points in S is a scrambled pair, i.e.,

If X contains an uncountable scrambled set, then the dynamical system (X,f) is called chaotic in the sense of Li-Yorke. It is well-known that the surjection continuous transformation on compact metric space with positive topological entropy is chaotic in the sense of Li-Yorke[12]. Note that the topological entropy of the Luroth map is infinite, the result in Ref. [12] can not be applied since it is not continuous.

In the following we will show that the scrambled set for Luroth map is small in the sense of Lebesgue measure and large in the sense of Haudsdorff dimension, not just uncountable.

Theorem 1   Let T be the Luroth map on (0, 1), then all scrambled sets for T have null Lebesgue measure.

We use N to denote the set of positive integers, Λ the set of points whose Luroth expansion is finite, λ the Lebesgue measure and dimH the Hausdorff dimension.

In this section, we present some elementary results in the theory of Luroth expansion and some fundamental concepts in symbolic dynamics. For more details, we refer to monographs of Dajani and Kraaikamp[8] and Kurka[13].

a rank-n basic interval. Denote by

is the interval with the endpoints

For any integer M≥2, let EM be the set of points in (0, 1) whose digits in the Luroth expansion do not exceed M. That is,

We can see that EM is a self-similar set, and then the Hausdorff dimension of EM is the unique positive root of

Now we give some notations for symbolic spaces. we denotes by A n the set of words of A with the length of n. A n is the set of infinite words and

, the concatenation of words

, we denote the symbolic space of one-sided infinite sequence over A by

. The symbolic xi is called the i-th coordinate of x. Let i,j be positive integers with i<j, write

, we define the metric

The shift map σ is defined by

2 Proofs of Theorem 1 and Theorem 2

In this section, we first prove that all scrambled sets of Luroth map have null Lebesgue measure. To deal with Theorem 2, inspired by Xiong[15], Liu and Li[16], we will construct a scrambled set in

and then establish a continue and bijective map between

and (0,1) such that the projection of the scrambled set in

, let k be the smallest positive integer such that

be all rank-k basic intervals from left to right, put

Thus there exist two positive integers i≠j such that

, which contradicts the definition of scrambled pair.

and ΔM be the maps dependent on the symbol M(M≥3), we write

to emphasize the dependence of M.

One can see that

be a sequence of positive integers, for any

are continuous and injective, the mapping ΔM is a continuous bijective from

, we have the following lemma.

Proof   Without loss of generality, we assume that

. It is worth nothing that

Hence, by the definition of

, it is easy to see that M1 appears infinitely often in

, but not appear in

such that u≠v. We shall prove that (u,v) is a scrambled pair for shift σ.

, then there exist two different points

. Since x≠y, there exists k≥1 such that

. Notice that the symbols xk and yk appear infinitely often in the same location of

respectively. Using the same method, we obtain that xk and yk appear infinitely often in the same location of

, respectively. As a result, there exists an increasing sequence

On the other hand, by (4) and (5), there exits an increasing sequence

By the definition of

, there exists an increasing sequence

By the definition of ΔM, there exists an increasing sequence

The proof of lower limits is similar to the case M1=M2. In fact, there exists an increasing sequence

, with the same method, we get

It is the fact that the Luroth expansion of

is infinite and unique. Then for any

, we define a continuous bijective map Ф from

, by the definition of scrambled set, we shall prove that

is a scrambled pair of T.

Lower limits   By Lemma 3, we have

, thus there exists an increasing sequence

. Recall that the map Ф is continuous and

It is easy to see that

Upper limits   We divide the proof into two cases.

, thus there exists an increasing sequence

. Without loss of generality, let 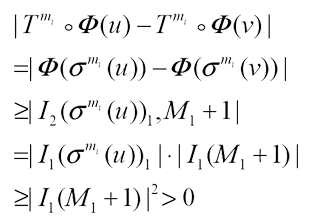 . From 2) of Remark 1, there exists an increasing sequence

. Suppose that M1<M2, with the same method, we have

In order to estimate the Hausdorff dimension of

, we shall make use of a kind of symbolic space described as follow: for any n≥1, set

where the union is taken over all dn+1 such that

. It is obvious that

, then the length of

is n-t(n). For simplicity, set

By the definition of t(n), it is easy to check that for large enough n there exist two positive constants c1,c2 such that

, there exists N1 such that for any

, without loss of generality, we assume that x<y. Notice that the points x and y can not be contained in the same

and large enough k. Thus there exists a greatest integer n such that x,y are contained in the same basic interval of rank n, that is to say, there exists

. As a consequence, the distance y-x is not less than the gap between

denote the right endpoint of

and the left endpoint of So y-x is greater than the distance between δ1 and δ2, then

Proof of Theorem 2   Consider a map

fined as follows: For any