† To whom correspondence should be addressed. E-mail: zhy@mail.usts.edu.cn

Time scale provides effect mathematical tools for the research of complex dynamical systems. German scholar Hilger[1] first unified and extended the theory of continuity and discreteness ― an analytical theory on time scales. Since then, many scholars[2-10] have conducted detailed studies on time scales. Time scale is also widely used in practical problems. For example, in a simple series circuit composed of resistance, capacitance and self-inductive coil, when the capacitor is periodically closed at a fixed frequency, the current change rate in the circuit can be precisely described by the derivative on time scales[11], nonlinear partially defined systems on an arbitrary unbounded time scale are studied[12,13].

The research for symmetry and conservation law is an important direction in the development of modern analysis mechanics. Noether[14] studied the invariance of action integrals in finite continuous groups and revealed the internal relationship between symmetries and conserved quantities in dynamic systems. Lutzky[15] introduced the Lie symmetry method of mechanical system, that is, the equation remains unchanged after the introduction of infinitesimal group transformation. Mei[16,17] studied the dynamics equations for holonomic systems, nonholonomic systems and Birkhoffian systems in detail, as well as the corresponding symmetries and conserved quantities for these systems. Afterwards, some progress has been made in the study of symmetry and conserved quantities for different mechanical systems[18-22].

The symmetries and conserved quantities for different dynamical systems under time-scale shifted variational problems are firstly studied. Take the Lagrange system as an example. In classical dynamical system, assuming that the configurations for the dynamics systems were determined by

, then Lagrangian functions were written as

. On time scales, the Lagrangian functions were written as

. On the shifted variational problem, Bartosiewicz and Torres[23] derived Noether's theorem under the

-derivative by using the time reparameter method, and proved the variational problem of mechanical system. Bartosiewicz and his co-workers[24] studied the time-scale second Euler-Lagrange equation, and derived Noether's conserved quantities on time scales by using this equation. Subsequently, many scholars[25-34] began to carry out a series of studies on time-scale the variational principle for constrained mechanical systems and Noether's theorem of different dynamic systems. However, on a time scale, there are few studies on Lie symmetry in mechanical systems. Cai et al [35] preliminarily studied Lie symmetry and time-scale conserved quantity for Lagrangian systems. Zhang and his team[36-39] also discussed the time-scale for different dynamic systems and its Lie theorem.

Recently, Bourdin[40] studied the nonshifted problem on time scales. In the nonshifted variational principle, the classical Lagrangian function was written as

About time-scale calculus and its properties, please refer to Ref. [2].

is the delta derivative of

. Let all functions are differential and their derivatives are rd-continuous[2],

with the endpoint conditions

If the constraint equations are shown as

To calculate the variation in equation (8)

Integration by parts with equation (10), we get

By the principle and Eq. (11), we have the time-scale nonshifted constrained Birkhoff's equations [44]

Equation (13) should be called as the corresponding nonshifted free Birkhoffian system (5).

is an infinitesimal parameter,

are the infinitesimal generators.

And an extension of infinitesimal generator

and corresponding symmetry is said the Lie symmetry for nonshifted free Birkhoffian systems (5).

satisfy the deterministic equation (18), and there exists

This system (5) has the conserved quantity, that is

Therefore, the proof is completed.

then corresponding symmetry is said the Lie symmetry for the nonshifted generalized Birkhoffian system (7).

satisfy the deterministic equation (24), and there exists

This system (7) has the conserved quantity, that is

Therefore, the proof is completed.

of the infinitesimal transformations (15) satisfy the Lie symmetry deterministic equation

then corresponding symmetry is said the Lie symmetry for nonshifted constrained Birkhoffian system (13).

satisfy the deterministic equation (30), and exist

then system (13) has the conserved quantity, that is

Example 1 On time scales, the Hojman-Urrutia problem can be written 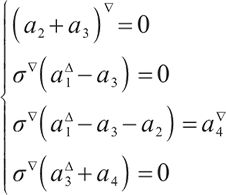 Form the structural equation (19), we can get

By Theorem 1, we can get conserved quantity

If the initial condition are

the trajectory of motion

and the conserved quantity

are calculated, the results are shown in Fig. 1.

According to the structural equation (25), we can get

By Theorem 2, we can get conserved quantity

The constraints equations are According to the structural equation (31), we can get

By Theorem 3, we can get conserved quantity

Time-scale theory has been generally used in many fields. When

, the dynamic equation on time scale can be degraded into a continuous differential equation. When

, the dynamic equation on time scale can be degraded into discrete difference equation. This paper mainly studies the time-scale with nonshifted variational problem which Lie theorem for three kinds of Birkhoffian systems. In this paper, nonshifted generalized Birkhoff's equations and nonshifted constrained Birkhoff's equations are derived by using principle (6). By introducing infinitesimal transformation, the structural equation of Lie symmetry is derived, and then the Noether conserved quantities caused by Lie symmetries is deduced. Since the study about nonshifted variational problem on a time scale is just beginning, the research of paper has great theoretical and practical significance.