. The proposed model is solved efficiently by the alternating direction method of multipliers (ADMM). Experimental results demonstrate that the proposed method outperforms some state-of-the-art non-blind deblurring methods in both objective and perceptual quality.

Image deblurring is a classical problem in low level vision. A blurred image can be considered as a convolution between the latent image and the point spread function (PSF) of the image capture device. The blurring process can be modeled as

is an original image without any form of degradation,

is a degradation matrix, f is an observed image, and n is the additive noise.

(2)where σ and μ represent the standard derivative and average value of the noise distribution n, respectively.

Image deblurring is an ill-posed inverse problem. In other words, its solution neither exists nor is unique, and small disturbances in the data may cause large errors in reconstruction. Hence, in order to overcome this ill-posedness, regularization techniques need to be considered to produce reasonable approximate solutions from noisy data. Rudin-Osher-Fatemi (ROF) model[2] is one of the most successful regularization methods due to its ability to preserve sharp edges[3]. The corresponding minimization task is as follows:

However, it is well known that TV-based restoration methods suffer from the staircase artifact in flat regions. There are many image restoration methods that have been developed to overcome these shortcomings. A well-known method is to replace the first-order total variation in the regularization term with a second-order (or higher) total variation.

In 2000, Chan et al[8] proposed the high-order TV (HOTV) model to improve the restoration quality. Contrary to TV regularization that penalizes gradient magnitude, regularizations using second-order derivatives do not penalize ramp regions whose intensity varies linearly, and therefore do not force the intensity of the region to remain constant. In other words, these regularizations have ability to potentially recover a broader class of images that consist of more than just piecewise-constant regions[9]. In Ref. [10], a second-order Laplace model for image deblurring was proposed by You and Kaveh. In 2003, a second-order derivative regularization[11] (Hessian regularization) model was proposed, called the Lysaker, Lundervold and Tai (LLT) model, which can effectively suppress the staircase artifacts and maintain the smoothness of flat areas of the image. In 2012, Hu et al[12] improved the model for image recovery and designed the maximum-minimum (MM) algorithm to solve the model. Their numerical experiments show that second-order TV has an advantage over classical TV regularization in avoiding staircase artifacts. In Ref. [13], the authors pointed out that high-order TV’s ability to preserve edges became weaker compared with first-order TV regularization and tended to smoothen edges and other small details. Thus, hybrid models that combine higher-order TV with other regularization were proposed in many literatures[13-15].

Among the hybrid models, by replacing the first-order TV with a second-order TV, Zhang et al[16] obtained better results than the model with strongly convex terms presented in Ref. [17]. Furthermore, in Refs. [18] and [19], a combination of first-order and second-order TV priors is used to recover blurred images and the minimization model is solved by the ADMM algorithm. To further improve the restoration performance, Liu et al[20] investigated a spatially adaptive regularization parameter updating scheme. As an adaptive balancing scheme between first-order and second-order TV, Wang et al[21] developed a Poisson denoising framework based on an iterative weighted total generalized variational (TGV) model. In Ref. [22], Liu et al pointed out that TGV can maintain sharp edges and perform well in areas of gradual intensity slopes.

be a shear operator with the shear angle

-th entry of Xshr is given, for

(6)where |.| represents the procedure rounding the real number to the nearest integer in the zero direction. The parameter d indicates the axis of shear (top

), and θd determines the degree of shear. For example,

means that the image X is sheared with top axis and θd. In particular, θd=0 means

is the identity transformation, i.e., no shear. Figure 1 shows the results of shear operator in different directions at an angle of

TV regularization was introduced by Rudin et al[2], for image denoising and further extended to other image restoration tasks. For the gray-scale image

, its discrete total variation norm is

is defined as follows

TV norm only contains finite difference in horizontal and vertical directions, and this leads to losing some detailed information in other directions.

TV regularization preserves fine features and sharp edges, but it usually produces staircase artifact that is not presented in real images[24,25]. In many applications[26,27], some authors have proposed a higher-order TV to reduce staircase artifact. HOTV of u is defined as

denotes the second-order difference of the ((j-1)n+i)-th entry of the vector u. By combining the higher-order finite difference operator and the shear operator, we propose the shear high-order gradient (SHOG) operator by the following way:

denote shear along the 'top'(or 'bottom') and 'left'(or 'right') direction with different angles, respectively. With different types of texture images, we choose different directions based on our experience. Then for the gray-scale image u, its discrete shear higher-order total variation (SHOTV) norm is

The shear gradient has following properties:

is linear, so it can be represented as matrix, which is denoted by

is permutation matrix, it is orthonormal.

and the horizontal gradient operator Dxx are commutative when

and the vertical operator Dyy are commutative when

Proof   Firstly, we show that

, by the definition of gradient operator and shear operator, we have

Lastly, by the orthogonality of matrix

Under the periodic boundary conditions, both the blurring matrix and gradient matrix are Block-Circu- lant-with-Circulant-Blocks (BCCB), and thus are diagonalizable by the 2D discrete Fourier transform. In this subsection, we will show that the SHOG matrices are BCCB when the shear angle is

indicates shearing at angle of

is a permutation matrix of the following form 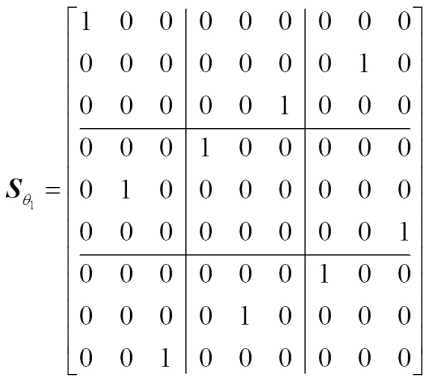 Since gradient matrices are BCCB matrices under periodic boundary condition, it can be verified that the

in formula (10) are also BCCB matrices when shear angle is

have the following form: have the following form: But unfortunately, when the shear angle θd∈

do not always have BCCB structure. When the shear angle is θ1=40°, the shear matrix

has the following form: 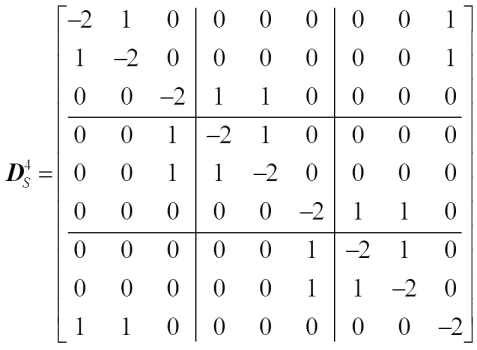 It can be noticed that the above matrix is not a BCCB matrix.

Considering the advantages of high-order TV and shear operator, we propose the following optimization model

where Ω=[0,255]. To minimize problem (16) robustly, we hereby adopt framework of alternating direction method of multipliers (ADMM)[28]. Equation (16) can be converted into a constrained optimization problem:

The corresponding augmented Lagrangian function of (17) can be written as

(18)where ρ1, ρ2 are penalty parameters. Variablesμ1 andμ2 are the Lagrange multipliers associated with the constraints w=DSu and z=u, respectively. ADMM minimizes the Lagrangian function on two sets of variables u, w and z. Since w and z are decoupled from each other, they can be solved separately.

Part of the appeal of ADMM is the fact that the algorithm lends themselves to parallel implementations. The algorithm is given in Algorithm 1.

In this section, we discuss the optimization strategies for solving each sub-problem of (18) one by one.

From the optimality conditions, we have

Considering what was discussed in subsection 1.3, (DS)TDS are BCCB matrices only when the shear angle is

. While the shear angle is not

, computing the inverse of the left hand of (21) in each iteration is costly. In this paper, we set the shear angle

. KTK is also BCCB matrix under the periodic boundary condition. As a consequence, Eq. (21) can be efficiently solved by one FFT operation and one inverse FFT operation as

(22)where F represents the two-dimensional discrete Fourier transform and F-1 is the inverse transform.

The w sub-problem is a convex second-order deblurring problem

The z sub-problem is a projection problem. For an 8-bit image, the range of pixel values can be kept at [0, 255], and the closed-form solution can be obtained by using the projection operator

The Lagrangian multipliers are updated as follows

The proposed algorithm is named SHOTV and shown in Algorithm 2.

In this section, we present various numerical results to illustrate the performance of the proposed algorithm for non-blind image deblurring. All experiments are carried out on Windows 10 64-bit and Matlab 2019b running on a desktop equipped with an Intel Core i5-10300 H CPU 2.5 GHz and 16 GB of RAM. The source code for all competing methods was obtained from the original authors and we use the default parameter settings.

The test images are shown in Fig. 3, and the pixel values of the images are normalized to [0, 1] for simplicity. Both Peak Signal to Noise Ratio (PSNR) and Structural Similarity metrics (SSIM)[29] are used to evaluate the quality of the reconstructed images. They are defined as follows:

(30)where u is the clean image, f is the recovered image, Maxu is the largest possible value of the image u.

In this subsection, we report the performance of the proposed SHOTV method for image deblurring and compare it with some leading deblurring methods, including FTVd[4], ADMM frame[7], ADMM TV[5] and HOTV[18].

First, we test the 9×9 Gaussian blur with a standard deviation of 9. The blurred image is generated using the MATLAB function “imfilter” with periodic boundary conditions. Then, the blurred image is corrupted with zero-mean additive white Gaussian noise σ2=0.001. The PSNR and SSIM values for the deblurring experiments are reported in Table 1 and Table 2. The numbers in bold indicate the best performance. One can observe that the proposed method outperforms the other competing methods. We choose Fingerprint, Cameraman, Hill and Shirt images for Gaussian deblurring and denoising comparison, and the recovered images are shown in Fig. 6. From the comparison, we can see that the restored images by our method retain more texture and have fewer artifacts. As can be seen from the Shirt image in Fig. 6, our proposed algorithm retains more texture information through the shear operator, resulting in a significant improvement in image deblurring.

Similarly, we test the motion blur with a len size 35 in the blur kernel and a rotation angle 50º. The blurred image is generated using the MATLAB function “imfilter” with periodic boundary conditions, and the blurred image is corrupted by zero-mean additive white Gaussian noise with ρ2=0.001. The PSNR and SSIM results for all competing deblurring methods are reported in Table 2. One can observe that the proposed SHOTV method can obtain better result than other competing mehtods. The blurred images and the deblurred images are shown in Fig. 7. Compared with other methods, our algorithm can preserve more texture structure and the deblurred image contains fewer artifacts compared with first-order TV.

PSNR and SSIM comparison of different methods for Gaussian deblurring

In this paper, a new SHOG operator is proposed by combining the high-order gradient operator and the shear operator. By both theoretical analysis and experiments, we show that the proposed SHOG operator incorporates more directionality and can detect more abundant edge information. We extend the HOTV norm to the SHOTV norm based on the SHOG operator, and then employ SHOTV norm as the regularization term to establish an image deblurring model. We also study some properties of the SHOG operator, and show that the SHOG matrices are Block-Circulant-with-Circulant-Blocks (BCCB) when the shear angle is

. ADMM scheme is exploited to solve the proposed model efficiently. Extensive numerical experiments demonstrate the superiority of the proposed method in terms of visual quality and quantitative metrics.

PSNR and SSIM comparison of different methods for Gaussian deblurring

In the text
Table 2