However, some epidemic diseases, such as viral hepatitis, SARS, and whooping cough, become conta- gious only after they have been dormant in the popula- tion for a period of time.

Therefore, more general systems than the types of SIRS and SIR need to be considered to research the role of hatch in the development of infectious diseases. It can be supposed that susceptible population first experience an incubation period after infection before becoming infectious. The most general form of an epidemic model is an SEIR model consisting of four population subclasses: S-susceptible, E-exposed, I -infected and R-recovered. All other models are cases of the SEIR model under various parameter restrictions. If there is no immunity and hence no R class, the SEIS model is obtained, which means the average period of immunity tends to be zero.

Many epidemic models with the infectious force in the latent period have been performed. Li [14] analyzed the global dynamics of an SEIR model with varying total population size. Sun [15] discussed the global dynamics of an SEIR model with a varying total population size and vaccination. Sun and Hsiehc[16] studied the global analysis of an SEIR model with varying population size and vaccination. Yuan et al [17] considered threshold dynamics in an SEIRS model with latency and temporary immunity. Zhang[18] studied global asymptotic stability of a delayed SEIRS epidemic model with saturation incidence. Zhang et al [19] considered an SEIR epidemic system with nonlinear transmission rate. Trawicki[20] proposed a deterministic SEIRS epidemic model for modeling vital dynamics, vaccinations, and temporary immunity. We can see that the disease models mentioned above do not consider the infectious force in the latent and recovered period. However, for infectious diseases such as hepatitis C and condyloma acuminatum, incubation and recovery periods may be contagious. Although it is difficult to measure infectivity exactly, it is generally accepted that the degree of infectivity declines with the acquisition of immunity.

The incidence of diseases plays an extremely important role in the analysis of infectious disease models. Incidence should be recorded as

, where N is the total population size. In many models of epidemiology, the bilinear incidence rate βSI and the standard incidence rate

are often considered[20-22]. The bilinear incidence rate is duce to the law of mass action. It has been pointed out that for standard incidence rate, it may be a good approximation if the number of available partners is large enough and everybody could not make more contacts than it is practically feasible[23, 24]. It has been suggested by several authors that the disease transmission process may have a saturation incidence rate, generally written as

, where aI measures the infectivity of the disease and

measures the inhibitory effect of behavioral changes or the crowding effect of infected individuals when the number of susceptible individuals increases. Compared with bilinear and standard incidence rate, saturating incidence rate may be a better fit for our actual situation. Several authors have studied epidemic models with saturation incidence rate[25-29]. In this paper, we introduce the general contact rate β(N)SI into the infectious disease model, which is more extensive.

In this work, we are interested in an SEIR model with different general contact rates, which also has the infectious force in the exposed and recovered period.

The total population is assumed to be divided into four distinct epidemiological subgroups, namely susceptible, latent, infectious and recovered (removed), with sizes denoted by S(t), E(t), I(t), and R(t), respectively. The size of the total population is expressed in N(t) at time t, where

. The transfer mechanism for the class S to the class E is guided by the function:

are general contact rate, which satisfies the following assumptions, for N>0,

We construct the ordinary differential equation of the SEIR epidemic model as follows: 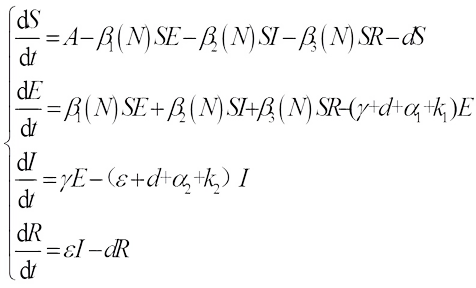 (1)where A is a constant recruitment rate of the population;

Summing up the four equations of system (1) and denoting

From the formula of N', we obtain

. From a biological point of view, we study system (1) in the following feasible region

represents the non-negative cone and its lower dimensional faces. It can be shown that D is positively invariant with respect to (1).

2 Stability Analysis of the Disease-Free Equilibrium

Let the right side of equation (1) be zero, and by calculating formula (2), we get , and we have the following equation about N:

So system (2) always has the disease-free equilibrium Hence, the equation F(N)=0 has only a positive root in the interval

, that is, system (1) has an unique endemic equilibrium

are determined by (2). It is easy to obtain the following theorem.

Proof   To prove this result, we consider the following Lyapunov function Calculating the derivative of V(t) along the positive solution of system (1), we get or R0=1. The largest invariant set in

is the singleton {E0}. When R0≤1, the global asymptotical stability of the disease-free equilibrium E0 follows from LaSalle’s invariance. When R0>1, S sufficiently closes to A/d except E(t)=I(t)=R(t)=0, we have the relation V'(t)>0. Hence the solutions to system (1) starting sufficiently close to E0 in D move away from E0 except those starting on the invariant S-axis approach E0 along this axis.

In this section, we analyze the local stability of the endemic equilibrium E* of system (1) with the help of the Routh-Hurwitz criterion theory. We have the following result.

Theorem 2   If R0>1, the endemic equilibrium E* of system (1) is locally asymptotically stable.

Proof   The Jacobian matrix of system (1) at the E* is Then, the characteristic equation of J (E*) at E* is of the form

By calculation, we have By calculation, we have

. By Routh- Hurwitz stability, all the four eigenvalues have negative real parts. Thus, the endemic equilibrium E* of system (1) is locally asymptotically stable in D, when R0>1.

In this work, we aim to study the global dynamics of the endemic equilibrium E* of system (1) by means of the limiting equation theory and the method of autonomous convergence theorem.

In order to study the global stability of the endemic equilibrium E* of system (1), the following results can be found in Ref. [30]. We consider the following two systems

Lemma 1   Let P be a locally asymptotically stable equilibrium of system (4) and ω be the ω limit set of a forward bounded solution x(t) of system (3). If

Corollary 1   If solutions to system (3) are bounded and the equilibrium P of the limit system (4) is globally asymptotically stable, then any solution x(t) to system (3) satisfies

By calculation, we have the following differential equation (6)System (6) is equivalent to system (5). From biological considerations, we study system (6) in the closed set

the boundary and the interior of T in

, respectively. For system (6), the global stability of the endemic equilibrium E* is considered when

, we can obtain the following limit system (7)We make the change of variable

, y=E, z=I, then the following (5) is equivalent to the above system (9)where T is an open set. If system (9) satisfies the following conditions: ① System (9) exists a compact absorbing set K⊂T and has a unique equilibrium P in

Theorem 4   A sufficient condition for a periodic orbit

is asymptotically stable, where

is the second additive compound matrix of the Jacobian matrix

of f. System (9) is called the second compound system of the orbit P(t).

Lemma 2   Any periodic solution to system (8), if it exists, is asymptotically orbitally stable.

Proof   Suppose that the solution

is periodic of least period τ>0 such that

. The periodic orbit is

. We have the second compound system x'= J [2](P)x of the differential system

in the periodic solution is the following periodic linear system From the condition (1) of Theorem 3, we can know there exists constant η>0 such that

. By direct calculations, we can obtain the following differential inequalities:

(17)Rewrite the last two equations of system (8), then we obtain

, and in turn that

. As a result, the second compound system (10) is asymptotically stable and the periodic solution

Furthermore, the system has the following form

The off-diagonal entries in this matrix are non- negative, the system as a whole is quasimonotone. Thus we can verify that system (5) is competitive with respect to the partial ordering defined by the orthant

Theorem 5   If R0>1, the endemic equilibrium E* of system (1) is globally asymptotically stable.

In this section, we provide the numerical simulation of the model to illustrate the main theoretical results above to better explain the occurrence and development of the infectious disease. The number simulations for system (1) are shown in Figs. 1-3. Choose

In this work, we have performed a complete mathematical analysis of the global stability problem at equilibrium with SEIR models with general contact rates and latent period, both theoretically and numerically. For the model, we give the expression for the basic reproduction number R0. When R0<1, as shown in Theorem 1, the disease-free equilibrium is globally asymptotically stable by LaSalle’s invariance principle (see Fig. 1 and Fig. 3(a)), and the disease always disappears eventually. When R0>1, Theorem 5 tells us that by limit equation theory and periodic orbit stability theory, the only endemic equilibrium is globally asymptotically stable (see Fig. 2 and Fig. 3(b)), and the disease persists at the endemic equilibrium if it exists initially. If the infectivity of the disease in the exposed and recovered period is smaller, the smaller the basic regeneration number, the more conducive to the elimination of the disease. Therefore, for the infectious diseases of the exposed and recovered period, not only the patients in the infected period, but also the patients in the exposed and recovery period should be controlled, so as to control and eliminate the spread of the disease more effectively. Finally, numerical simulations are carried out to confirm the correctness of the theoretical analysis.

Interestingly, the stability of the model equilibrium is affected by the general contact rate. We believe that our findings offer guidance in face of the disease. In addition, we would like to point out here that the model (1) leaves us a problem that we only take the general form of contact rate, a more abstract situation in the model into consideration, but the incidence of other specific forms such as standard or nonlinear remains undiscussed. We leave this for our future work.