Some Rank Formulas for the Yang-Baxter Matrix Equation AXA = XAX

Let A be an arbitrary square matrix, then equation AXA =XAX with unknown X is called Yang-Baxter matrix equation. It is difficult to find all the solutions of this equation for any given A. In this paper, the relations between the matrices A and B are established via solving the associated rank optimization problem, where B =AXA = XAX, and some analytical formulas are derived, which may be useful for finding all the solutions and analyzing the structures of the solutions of the above Yang-Baxter matrix equation.

denotes the set of all m×n complex matrices.

stand for the rank, conjugate transpose and the range (column space) of a matrix

, respectively. The Moore-Penrose inverse, denoted by A +, is the unique solution X of the following Penrose equations

are two oblique projectors included by

The rank and generalized inverse of matrices are powerful tools to characterize relations among matrices, matrix equations, or matrix expressions. Two seminal references are Ref. [1] by Marsaglia and Styan, and Ref. [2] by Meyer. Some fundamental rank equalities and inequalities related to generalized inverses of block matrices were established in the two papers. Since then, the main results have widely been applied to dealing with various problems in the theory of generalized inverses of matrices and their applications, over complex field, even quaternion field, see, e.g., Refs.[3-9] and therein.

(1)where A is any given matrix, and X is unknown to be determined. Hence, the matrix equation (1) can be referred to as Yang-Baxter matrix equation. Generally, it is difficult to obtain all the solutions of the equation because of its nonlinearity. Recently, Ding and his partners[15,16] have made several outstanding results. For instance, in Ref.[16], they have completed the existence proof based on the Brouwer fixed point via the direct iteration when the given A is a nonsingular quasi-stochastic matrix such that the inverse A -1 is a stochastic one. In addition, Cibotarica et al [17] studied equation (1) under the assumption that the given matrix A was idempotent. By means of the Jordan decomposition of A , they deduced general solution of the matrix equation mentioned above.

However, as is pointed out above, there may be many other solutions of this matrix equation which are not found. In this paper, letting A be an n×n matrix, we shall make analysis on the relation between the matrices A and B via considering an associated rank optimization, where

, and some rank formulas will be established, which may provide ideas for finding all the solutions and analyzing the structures of the solutions of the Yang-Baxter matrix equation (1).

is consistent, then we have the following equality-constrained rank optimization problem

Obviously, if the minimal rank arrives at zero, then it is equivalent to (1).

The outline of this paper is as follows. In Section 1, some basic formulas on the rank of matrices or matrix expressions will be given. In Section 2, the rank optimization (2) will be studied, after that some rank formulas with respect to the Yang-Baxter matrix equation (1) will be shown. As applications, the general solution of (1) will be expressed under some constrained conditions. Finally, we conclude this paper with some remarks.

In this section, we introduce some necessary results with respect to the ranks of block matrix and matrix expressions.

(d) In particular, if 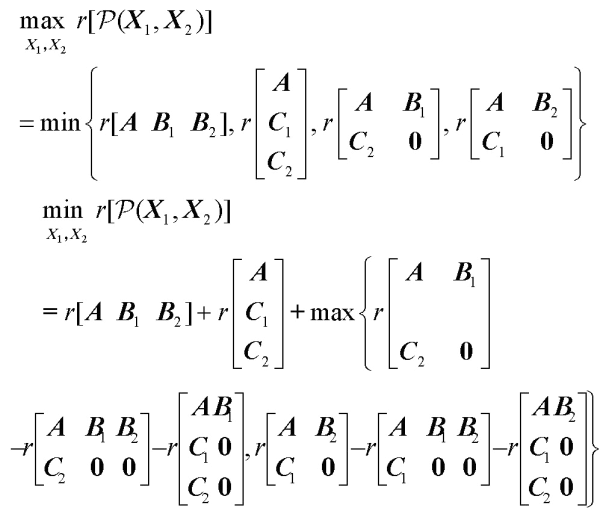 Lemma 3   Let A , B and C be given matrices with appropriate sizes. Then matrix equation

is consistent, if and only if one of the following conditions holds:

In this case, the general solution of the matrix equation is

, where U and V with appropriate sizes are arbitrary.

The optimization problem (2) is indeed the extremal ranks problem upon the nonlinear matrix expression under equality constraint. Tian[5,19] developed an algebraic linearization method to solve the rank and inertia problems of some nonlinear (Hermitian) matrix expressions. The key technique of this method derives from the following block matrix operation

are given. This equality implies that

On the other hand, for the given matrices A and B as in (1) and (2), applying Lemma 3 to matrix equation

, we know that this equation is consistent if and only if

(4)In that case, the general solution of which is

On the basis of the above analysis, we obtain the following theorem. Now, we simplify (8) by the elementary block matrix operations. Noting that the consistency conditions in (4), it is clear that

These equalities as well as (4) will be frequently used in the sequel. Thus, by the elementary transformations of block matrices, Lemma 1 (a)-(c) follow that Theorem 2   Let A and B be given matrices satisfying (4). Then the Yang-Baxter matrix equation

is consistent, if and only if

Proof   According to (6), Yang-Baxter matrix equation (1) is consistent, if and only if

Furthermore, the first equality can be rewritten as

From this theorem, one can obtain the following conclusion.

is consistent, if and only if

. In this case, the general solution of (1) can be expressed as

(21)where idempotent W commuting with A is arbitrary, U 3 is an arbitrary matrix with order n, and U 1, U 2, satisfy

, then the general solution commuting with A of the Yang-Baxter matrix equation (1) is

Proof   Combining (4) and the above assumptions, we get

That is to say, the Yang-Baxter matrix equation (1) satisfies

if and only if

Proof   From (6) we know that the result holds true.

In this paper, we have studied the Yang-Baxter matrix equation (1). By using the rank of matrices, this equation is converted into solving an associated minimal rank optimization problem, i.e., (2). After that, some analytical formulas with respect to the known matrices were given. As applications, the general solutions of (1) were derived under some assumptions. These rank formulas may be useful for finding all the solutions and analyzing the structures of the solutions of the Yang-Baxter matrix equation. How to express the general solution of (1) is an interesting but challenging problem.