As a standard analysis method of the topic model, the Latent Dirichlet Allocation (LDA) model was proposed by Blei et al[5] after the development of Latent Semantic Indexing (LSI) and Probabilistic Latent Semantic Indexing (PLSI), and then widely used in many fields such as topic mining, topic crawler, a recommendation system, and text classification. Alsumait et al[6] proposed Online Latent Dirichlet Allocation (OLDA) for topic modeling of temporal text data. Lau et al[7] proposed Online Twitter LDA based on OLDA, which controls the distribution of topic words by introducing contribution factors to adjust the parameter’s changes of the previous and next time windows. Kalyanam et al[8] combined the social background and text content to explain the role of adding other information on topic evolution. Hu et al[9] expressed the topic as a beta distribution over time and as a Dirichlet distribution about emotions and made emotion classification and confusion contrast. Chen et al[10] proposed the OLDA-based Forum Hot Topic Evolution Tracking Model (HTOLDA), which reduces the dimension of text from lexical space to topic space, then clusters it to find and transmit hot topics. Refs. [11-14] eliminated the time slice of documents containing old topics in the topic content matrix by constructing the topic similarity matrix. Zhang et al[15] obtained the vector expression of topic words according to the topic model and then obtained the evolution path of the topic through cluster analysis. As mentioned above, the existing methods mainly detect the sensitivity of topic evolution from two perspectives.

According to the rich emotional information contained in the review text, many topic sentiment hybrid models have been proposed[16,17]. Cui et al[18-21] proposed to construct an ideal comment set of positive and negative emotions based on the LDA model, calculate the topic similarity between real reviews and ideal reviews, and classify the sentiment of review text. Xu et al[22-24] obtained the expression of topic words based on topic2vec, and then calculated the content intensity and sentimental tendency of the same topic through CNN, and analyzed the evolution of the topic. An et al[25-28] used word2vec and k-means for topic detection and adopted a multi-source sentiment analysis method based on sentiment dictionary to analyze the co-evolution of topic and sentiment. Liu et al[29,30] used the sentimental information of the previous moment as the priority of the current sentimental parameters in the topic model and used cross-entropy to calculate the sentimental similarity.

Different from the method mentioned above, this paper proposes a Product Sensitive Online Dirichlet Allocation model (PSOLDA) model which uses LDA to obtain the topic word distribution in the current time window and proposeds a novel topic word sentimental polarity judgment method. We introduce sentimental factors to reflect the change in sentimental polarity of the topic word in the different time windows and use sentimental factors to adjust the topic distribution of the current time window and enhance the sensitivity of the model to new topics. The experimental results show that the PSOLDA model proposed in this paper has a greater improvement in the subject detection field compared with the previous model.

As shown in formula (1), the prior parameters of the subject word are preserved in the parameter evolution matrix.

represents the evolution matrix of the k topics on the

is the length of the historical time slice.

is the prior parameter of the topic k in a time slice t. The OLDA model determines the evolution of the topic by setting confidence values and comparing the parameter values of the forward and backward matrices.

The Online Twitter LDA model is mainly used to discover hot topics in short texts, such as Twitter and Weibo. The advantage of this model is that the model’s parameters will not grow with the new input text. Online Twitter LDA divides the text into several time slices according to the time series and then slides a fixed-size time window to keep the number of time slices in the time window unchanged. Compared with OLDA, it has a fixed-size parameter matrix, so it has a higher sensitivity to topic detection. Lau et al[7] proposed to use contributing factors to determine the relationship between the parameters of the previous and the next time windows. The parameters of the previous and next time windows are defined as follows.

Text for the previous time window:

is the priority of Topic t in Text d;

2 Topic Evolution under the Control of Sentiment Polarity

as the word distribution of Topicz, n as the number of topic words,

as a similar phrase obtained by using word vector similarity for the i-th word in the topic word distribution, in which nw is the number of similar words required. The formula for calculating Topic z sentimental polarity value is:

If the topic word wi is positive or negative in a sentiment dictionary, then xi=±1 and

; If the topic word wi is not in a positive or negative sentiment dictionary, then xi=0 and

2.2 The Calculation Method of Sentiment Factors

To study the effect of topic sentiment change on topic evolution, a topic evolution model integrating topic sentiment polarity is proposed based on the research of Lau et al[7]. Lau proposed to control the influence of the parameters of the previous time window on the current time window information by changing the contribution factor. Different from the method proposed by Lau et al[7], this paper maps changes in sentimental polarity of the topic to changes of sentiment factors, then obtains the prior parameters α,β of the previous time window to the current time window through sentimental factors.

, the number of negative sentiment topics as

, K as the number of topics modeled for LDA. The formula for calculating sentiment factor c is as follows:

The experimental data was crawled from the online reviews on financial products of the Online Lending House. A total of 28 772 reviews on seven financial products from September 2017 to March 2019 were collected through writing crawler scripts. The obtained review information is sorted by time series, and time slices are divided by month.

LDA algorithm is used to obtain the distribution of topic words for all texts, and the first 15 words of each topic word distribution are used to represent the topics. Then we get the 10 words that are closest to each topic word through word2vec, for a total of 6 000 words. Through the manual annotation, 284 words in the positive sentiment dictionary and 338 words in the negative sentiment dictionary are obtained, respectively. 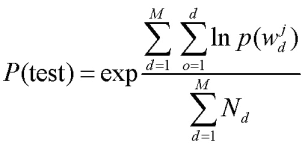 is the probability of each word in the test set.

It can be seen from Fig.5, when nw=3 and wh=3.15, the sentiment polarity classification algorithm has the highest accuracy.

In order to verify the impact of topic sentiment changes on topic evolution, the time slice text in units of months is input into the LDA model, and the topic sentimental polarity distribution in each time window is obtained, as illustrated in Fig.6. The time window is set to 10, namely a time window contains text data of 10 days. In each time window of Fig.6, the yellow part in the upper half means that the sentiment polarity is negative, and the blue part in the lower half is positive. Obviously, with the change of time, the sentimental tendency of the topic words has also changed. The above information is integrated into the model proposed in the paper to improve the accuracy of topic detection.

3.4 Comparison of Perplexity of Topic Models

Comparison of the distribution probability of topic words

However, the method proposed in this paper also has certain limitations. The review text is input into the time window in the form of time slices, which makes it impossible to judge the topic distribution of each review text. This will make it hard to examine the effect of the model from the perspective of text classification. Therefore, further research will focus on how to integrate the improved model into the process of short text classification.

In the text
Table 2

Comparison of the distribution probability of topic words